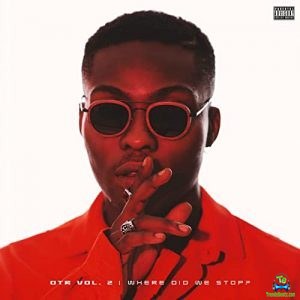 Reekado Banks - OTR Vol. 2 (Where Did We Stop) EP Album

Download ReekadoBanks OTR Vol. 2 (Where Did We Stop) EP Album: Most-Talented Nigerian Afrobeat/Afro-pop sensational musician, Reekado Banks outdoors his long-awaited extended playlist called, OTR Vol.2 (Where Did We Stop?), discharged this year 2021, through his imprint Banks Music Records.
The project sublimes five amazing joints, with no guest appearances. Reekado Banks once again proves his versatility coupled with authentic delivery. The project is really worth listening to.

Moreover, this project follows up after, Off The Record, in 2020. An interesting project that holds tracks like, "Rora", "People Dey", "Happy Yourself" and many other intriguing ones. Reekado Banks contribution to the Nigeria Music Industry has earned him several achievements.

Ayoleyi Hanniel Solomon, professionally known as Reekado Banks is a Nigerian singer and songwriter. In 2015, he won the controversial Next Rated award at The Headies. His debut body of work, Spotlight which was released under Mavin Records, debuted at number 10 on the Billboard World Albums chart.

Now, here comes an extraordinary extended playlist from Reekado Banks released under his imprint, Banks Music, which he tags, OTR Vol.2 (Where Did We Stop?) .

Download Reekado Banks - OTR Vol. 2 (Where Did We Stop) EP Album Below