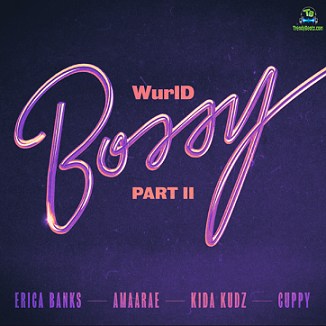 
Talented Nigerian artist, Wurld, delivers the remix of his trending song "Bossy" as he enlisted these Nigerian talented artists namely Erica Banks, Amaarae, Kida Kudz and Cuppy, on this amazing tune, which is a potential hit jam, highly-anticipated...
The original song of "Bossy" was lifted off from Wurld's 2020 debut Extended Play tagged "AfroSoul Deluxe" which houses 2 beautiful tracks, featuring Kidi Kudz and Cuppy.

Wurld, decides to kick start this year 2021, and unleashed the remix of his song "Bossy". Erica Banks, Amaarae, Kida Kudz and Cuppy, made their verses something to crave for on this song.
This remix is really worth listening to. Amaarae, a Ghanaian female singer, brought another vibe.