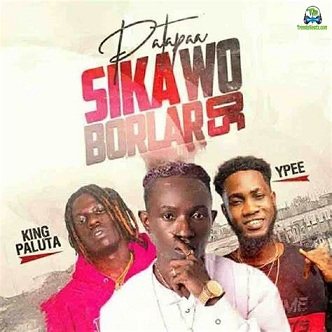 Track Title: Sika Wo Borlar So


Ghanaian hitmaker, Patapaa, bounced back again into the music mainstream, with this banging tune named "Sika Wo Borlar So" featuring King Paluta and Ypee.


Multiple-Award-winning Ghanaian talented artist, Patapaa, delivers this amazing song named "Sika Wo Borlar So" on which he features King Paluta and Ypee. This song was released in the year 2021.
Pa2Pa Sojas Records CEO, Patapaa, uses this song, to kick start, the month of June 2021. The "One Corner" crooner, Patapaa, released this song, for the listening pleasure of his music fans.

His collaboration between King Paluta and PeeNation CEO, Ypee, was so wonderful. King Paluta and YPee, ushers a blistering performance on this beat, which will be generally accepted by their music fans.
Patapaa, whose real name is Justice Amoah, has released numerous hit since his inception into the music domain. He became people's favourite after his song "One Corner" in the year 2017.


Share Patapaa - Sika Wo Borlar So ft King Paluta, Ypee Mp3 with others on;

Patapaa - Sika Wo Borlar So