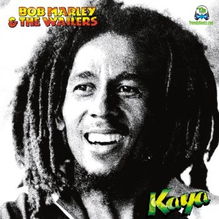 
Running Away is a song written and Composed by Bob Marley and The Wailers and it's off the album Kaya released in the year 1978.

Running Away is off Bob Marley's highest-charting non-compilation album titled "Kaya", This song peaked at No.4. Some critics at the time suggested that Marley had in some way sold out his hardcore political beliefs to produce an album of softer emotional hues, tailored for the mainstream market.

Running Away by Bob Marley makes reference to the statement everyman think his burden is the heaviest and to say he who feels it knows it really means, don't judge another persons pain on your own, because if you were in there shoes then you would know just how painful it is. The person feeling it knows what they feel.


Share Bob Marley - Running Away Mp3 with others on;