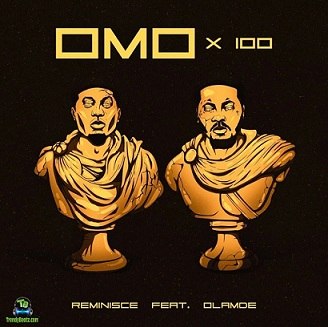 
Nigerian Hip Hop Sensational musician, Reminisce, delivers this mid-tempo soundtrack named "Omo x 100" as he taps the availability of Nigerian hit-maker, Olamide, who added a special touch to this song.
Reminisce, uses this song, to kick start, the year after long silence in the music scene. Omo x 100, comes through after his song "Toxic" featuring AG Baby, Adekunle Gold, who gave a pure top-notch rendition on the song.

This year 2021, Reminisce, bounced back with the banging tune, called "Omo x 100", featuring Olamide. YBNL Boss, Olamide, comes through on this track after his blazing studio project tagged "Uy Sucti" which is now making massive airplay in Nigeria and many other African countries.
Remilekun Abdulkhalid Safaru professionally known as Reminisce, has released numerous hits, since his inception into the music scene, This rapper has associated with the likes of Chinko Eun, Lil Kesh, CDQ, and many other top-notch lyricists.