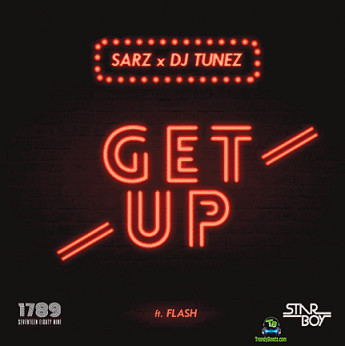 Track Title: Get Up

Talented Nigerian singer/record producer, Sarz, delivers this lovely tune called "Get Up" as he features DJ Tunez and Flash.


Award-winning Nigerian singer and sound engineer, Sarz, released this impressive soundtrack named "Get Up" on which he teams up with Starboy Records Disc Jockey, Dj Tunez and Young talented Nigerian singer, Flash.
This song, was released in the year 2017. Get Up, by Sarz, is a danceable tune, which is capable of lifting you, on your feet. Sarz, DJ Tunez and Flash, took their fans on another level on this number.

Osabuohien Osaretin professionally known as Sarz, is a Nigerian record producer, from Benin City, Edo State. This artist has worked with the likes Reminisce, Goldie Harvey, eLDee, Wande Coal, YQ and many other Lyrical genius.
Sarz, was the one who produced Wizkid's massive hit "Samba", which was nominated for "Song of the Year", at Nigerian Entertainment Awards.

Since then, Sarz has never disappointed his fans. Here comes this classic tune, called "Get Up" featuring Dj Tunez and Flash, who graced a wonderful performance on this tune.


Share Sarz - Get Up ft Dj Tunez, Flash Mp3 with others on;

Obongjayar ft. Sarz - If You Say