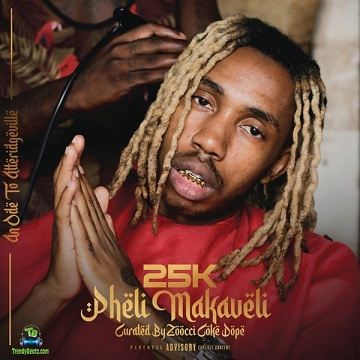 
Cop this brand new record, written and recorded by South African rapper, 25K, dubbed "Trap Jumpin". This bracing record, is coming from his 2021 debut album "Pheli Makaveli", which was released under the management of Sony Music Entertainment.
25K, opens the year 2021, with this blazing studio project, as he showcases his God-given potentials to his fans, on this body of work, which will be well-accepted by his fans.

Trap Jumpin, was listed as the fifth track of the album, which got its production accolades from South African brilliant music producers, Zoocci Coke Dope and Space Save Logic.
Pheli Makaveli Album, is an impressive work of work. Just take out your time, and listen to the whole tracks one by one, you will surely love it.