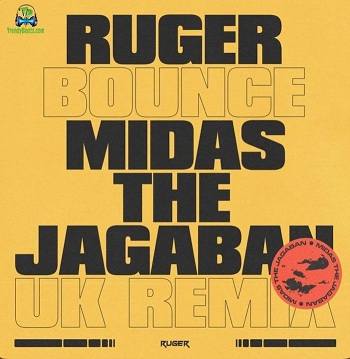 
The Nigerian lover boy, Ruger has come with the remix of his new trending song "Bounce (UK Remix)" featuring Midas The Jagaban.


After the release of "Bounce" by Ruger, the song has been raving and making a stir out there. Due to its trend, it leads the comparison with the one of Rema's. On social media, lots of fans positive reviews are being accumulated due to Ruger's great impression on the song leaving other released songs on the mute mode. Truly, the singer has hit the button this time and he has started being loved by fans.

Still, on what brought here. The song "Bounce" has been hitting and topping as one of the most streamed on the digital streaming platforms. Just after its release, the song started attracting fans attention becoming the new sound to chill out with. Talking to you right, the song is still the most favourite blowing fans minds. In case you've not been overhearing the song... Just know you are missing out.

Today, he appeared to take over again, giving us the "UK Remix" in which he employed the singer, Midas The Jagaban from UK-Nigeria. Midas The Jagaban made a godly impact on this song giving it a nice vocal that will be more catchy when listening to it. Both singers did greatly well and it was so amazing.


Share Ruger - Bounce (UK Remix) ft Midas The Jagaban Mp3 with others on;

Ruger - Bounce (Bounce Your Body Or We Bounce You Out)

Ruger - Bounce (Bounce Your Body On Me)