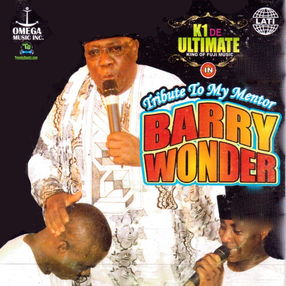 K1 De Ultimate urges everyone to move their body to the rhythm of this record captioned Let's Dance.

Sensational Fuji musician, K1 De Ultimate drives his fans crazy with this great tune titled Let's Dance, a record he released in the year 2013 off his phenomenal project labeled Tribute To My Mentor Barry Wonder.

The album Tribute To My Mentor Barry Wonder was packaged with nine marvelous sound tracks and this one dubbed Let's Dance was highlighted on that K1 De Ultimate catalogue as track number nine.

The people of Yoruba land are always happy anytime K1 De Ultimate drops a track. This singer was crown the Mayegun of Yoruba land based on his enormous talents in the music.


Share K1 De Ultimate - Let's Dance Mp3 with others on;