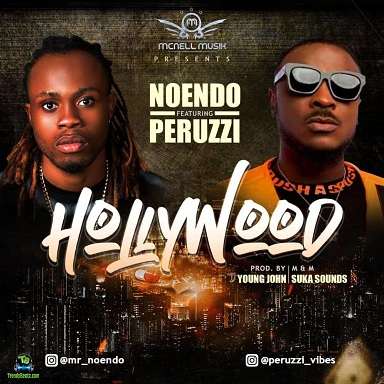 Talented Nigerian singer, Noendo teams up with the vibes machine, Peruzzi, on this number called "Hollywood".


Multi-Talented Nigerian singer, songwriter and record producer, Noendo, comes through with this stunning record called "Hollywood" as he taps the availability of Nigerian singer, Peruzzi, who brought a sultry vibe to this record.
Hollywood, by Noendo, is a nice record, with a positive vibe and killer rhythm. The song got its production credentials from Nigerian illest sound engineer and music producer, Young John. Mixed and mastered Suka Sounds.

Noendo, collaboration with Peruzzi, is the right medicine, for a great outing especially when weeks are hot with jams, back to back. The song is really worth listening to. Released under the management of McNell Musik.


Share Noendo - Hollywood ft Peruzzi Mp3 with others on;