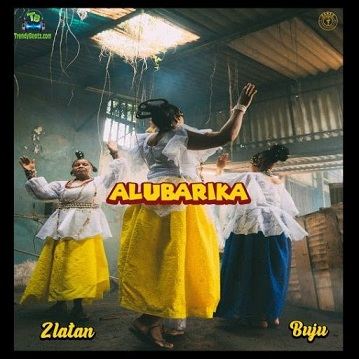 
One of the African favourite music artists, Zlatan collides with Buju, as they released this impressive studio number tagged "Alubarika (New Song)". Released in the year 2021.
Zlatan Ibile, pop out this stunning record, after he created magic with Davido and Mayorkun, on the track named "Cho Cho" which is still blasting speakers, and having good standing streaming on digital stores. It also comes up with a muisc video, shot and edited by famed videographer, Dammy Twitch, and has amassed more than 1 Million views on Youtube.

Omoniyi Temidayo Raphael, widely known as Zlatan is a Nigerian singer, rapper and songwriter. This artist is known well, for his hit singles "Osanle", "Killin Dem" and "Pepper Dem", just to mention a few. In 2018, he drop a single called "Zanku" which was a massive hit, with a new dance method of the same title.

Finally, the "Pepper Dem" crooner, Zlatan pairs up with Bujutouyourears, on this number "Alubarika (New Song)". Both artists, really put pen to the paper on this jam.

Aje ft. Zlatan - If You No Dey