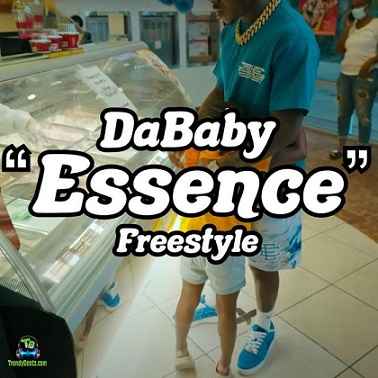 
Since the release of Wizkid's 2020 album, "Made In Lagos" the song "Essence" which featured the Nigerian female singer Tems stands as the best and the most favoured internationally. It has been going viral on social media and has become the most shazamed in USA. It is now topping as one of the most-streamed on the digital streaming platforms and via the Youtube channel, the official video has accumulated up to 25,731,973 million views and still gathering more.

Due to the song trend and high demand worldwide, it later featured the Canadian R&B singer, Justin Bieber which was released a few days ago and has become an international and potential hit one leaving other released songs on the mute mode. It was an amzing one seeing the singer, Justin Bieber with a special and lovely vocal that made the song the be more engaging, becoming the best of all the remixes.

Today we have a new freestyle of the song "Essence" from the American rave of the moment, DaBaby. Truly, it is another great performance from the rapper as he uses to do. The rapper showed that he can dive to any beat and do his best for the listening delight of the fan.

Are you a good fan of DaBaby?... I thing you have a new freestyle to listen to right here.

DJ Khaled ft. DaBaby - I Did It