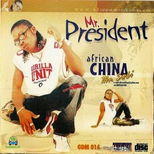 
Sherelo, is one of the hit song on African China successfully released project called Mr President.


Renowned Music maestro, African China discharged this wonderful song called Sherelo, as one of the hit song on his much accepted project labeled Mr President in the year 2006.

Sherelo can be found on African China's project called Mr President as the eighth soundtrack. More so, the aforementioned body of work from China contains nine dazzling joints.

African China was born in Orile in Lagos, Nigeria. He started music in 1985 at the age of seven and went fully into music at the age of 18 in 1996, after his secondary school.