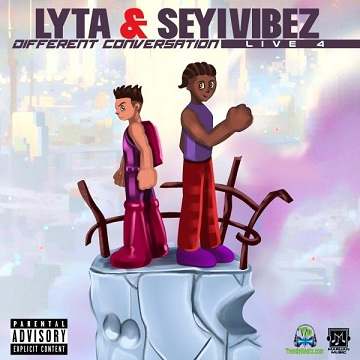 
We've waited for this song "Different Conversation" and right here we have it performed by Lyta and Seyi Vibez.


Lyta can't keep his fans waiting any longer but presented the song "Different Conversation" in which he featured Seyi Vibez, the Nigeria rave of the moment who made a good impact on the song. They released this song recently in the year, 2021 which is now attracting fans attention and accumulating lots of streams on the digital streaming g platforms.

"Different Conversation" was such an anticipated song from Lyta, but after giving us "14Ti (Freestyle)" which he did as he uses to do. He decided to break another record with this captivating song in which he employed the Nigerian singer, Seyi Vibez who made a good impact on the song for the listening delight of the fans.

Seyi Vibez has been in multiple records this year, but his performance on this song is an exceptional one. Both singers did perfectly well and did as much as expected. The song is another one with a special production that will surely be worth a place in your playlist.

Lyta - Are You Sure (Video)

Rexxie ft. Lyta - For You