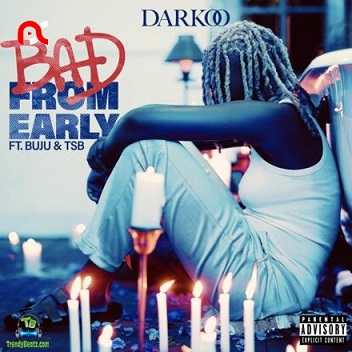 The singer and songwriter, Darkoo has come yet with a new so0ong named "Bad From Early" featuring Buju and TSB.

It has to be a successful one for Darkoo. The singer and rapper is a talented one having many classic records under his name. She came to prominence following the release of her hit single "Gangsta", featuring One Acen, which peaked at number 22 on the Official Singles Chart. Since then, the singer has still been proving herself as a veteran.

This time, she requested vocal assistance from the Nigerian vibe crooner, Buju and the record producer, TSB who joined forces in making the song to be a successful one. The song had a magical touch of Buju on it as he did on "Feeling" owned by Ladipoe and "Mood" by Wizkid. The song "Bad From Early" is another captivating one that will surely be worth a place in your playlist and here you have it.

Share Darkoo - Bad From Early ft Buju, TSB Mp3 with others on;

Darkoo - There She Go (Jack Sparrow)