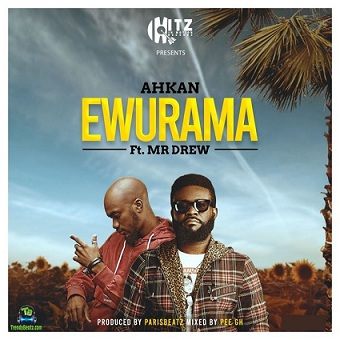 Ahkan, teams up with Mr Drew, on this record named "Ewurama". Released in the year 2021.


Talented Ghanaian music artist, Ahkan, pins out a new masterpiece soundtrack named "Ewurama", in which he taps the availability of Ghanaian Afro-pop singer, Mr Drew, who ushers a blistering performance on this record. The record was produced by Parisbeatz, mixed and mastered by Pee Gh.
Ahkan, uses this record, to kick off the third quarter of the year 2021, for the listening pleasure of his growing fanbase and the music community. The record comes through after his song "Donkomi" which features DJ Flex, still blasting speakers, collecting lots of streams, views and downloads on digital stores.

Mr Drew, who is one of the Ghanaian raves of the moment, came through on this tune, after his album "Alpha", which is now climbing major music charts. The collaboration between Ahkan and Mr Drew, on this record "Ewurama", is mind-blowing, both singers, flex their vocal prodigy, which their music fans will be pleased to hear.
Ewurama, is a sweet and serenading record, you can vibe in any mood. The lyrics, vocals and arrangement of words were of high quality.


Share Ahkan - Ewurama ft Mr Drew Mp3 with others on;