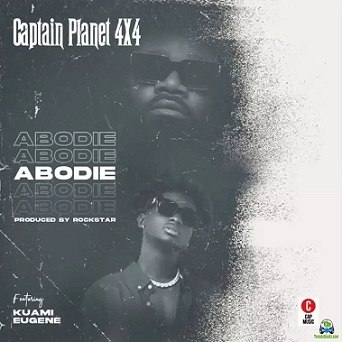 Well-Known Ghanaian rapper and performer, Captain Planet (4X4), surfaced back into the music scene, as he kicks off the month of September with this record called "Abodie", with vocal assistance from Lynx Enteraiantment act, Kuami Eugene, who took a whole verse for a perfect rendition, which his music will be pleased to hear.
Captain Planet (4X4), released this record after his song "Yebo Dada" which features Medikal, still buzzing around, collecting lots of streams, views and downloads on digital stores.

Captain Planet (4X4), collaboration with Kuami Eugene is the right tonic, especially when weeks are hot with jams, back-to-back. Both artists did justice to this record, which will be generally accepted by their esteemed fanbase and the muisc community. The record is a hit.
Abodie, is an impressive soundtrack, you will want to add to your playlist and play endlessly. Press play and enjoy Captain Planet (4X4) and Kuami Eugene collaboration.