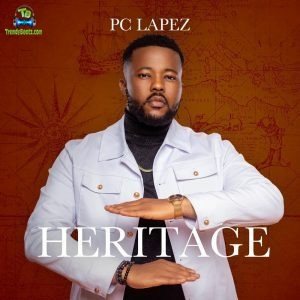 And here we have a new record "Obodo Bu Igwe" performed by PC Lapez featuring Mr Flavour and Phyno.

Still enjoying his previous drops, the Nigerian highlife singer, PC Lapez unlocks a new single "Obodo Bu Igwe" featuring Flavour and Phyno, the Nigerian celebrated crooners who contributed to making the song a successful one. They released this collaborative song in the year, 2021 which rises from PC Lapez new body of work album "Heritage" which has been served on the platform for your listening delight.

PC Lapez is a talented one who is known for his uniqueness. His songs are mostly made in the R&B and Highlife genre and fans are have been widely excited about having such a talented one in the industry. His new song "Obodo Bu Igwe" is now going viral and gaining lots of streams on the platforms as the 11th track.

On this one, he requested vocal assistance from Ijele of Africa, Flavour and the Nigerian indigenous rapper, Phyno who added their vocals to create a unique record. Imagine how it's gonna be having these acts in your song... Truly, It's gonna be hot.
Both singers did wonderfully and the song is another one that will surely be worth a high place in your playlist and here you have it.