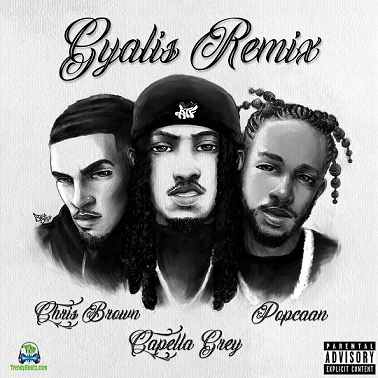 The American singer and rapper, Capella Grey comes through with the remix of his song "Gyalis" featuring Chris Brown and Popcaan.


American-Jamaican singer and rapper, Capella Grey delivers the remix of his record "Gyalis" having Chris Brown and Popcaan as vocal assistance. This collaboration comes between American and Jamaican corners and it's a potential hit one. They released this song in the year, 2021 which has been going viral and giving pleasure to the fans out there.

The song "Gyalis" was a hit single that was massively played after its release. Till now the song is making a huge trend and becoming one of the favourite songs of Capella Grey to the fans out there. Via the Youtube channel, the official video has accumulated 5,423,576 million views and still gaining more.

Due to the song trends, the R&B and Soul singer, Capella Grey can't leave the buzz of the trending fade away but delivered the remix which had assistance vocals from the American rave of all time Chris Brown and Jamaican Dancehall singer, Popcaan who played big roles on the song for the listening delight of the fans. Truly, the song is on point and you can imagine how it's gonna be having Chris Brown and Popcaan on your record. Trust me, you won't like to miss it.