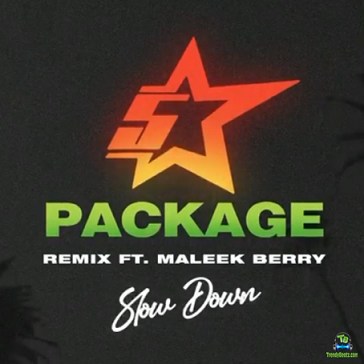 Slow Down, gets a remix, as King Promise, delivers again...


With its original record, having rave of reviews as well as having good streaming across digital stores. King Promise, hit the studio once again with the remix of "Slow Down". On this record, he enlisted Nigerian music producer and songauthor, Maleek Berry, who got a verse to showcase his talent, not just as a producer but also as a singer.
This masterpiece soundtrack was produced on the desk of ever blazing Ghanaian music producer, KillBeatz, with his magical fingers, released under exclusive licence to 5K Records Limited / Sony Music Entertainment UK Limited.

King Promise, came through with a remix after he created magic with Haedie One, on the record called "Ring My Line", which is now topping major music charts on digital stores.
Still savouring the song. King Promise links up with Maleek Berry, to avail something unique for their fans, tagged "Slow Down (Remix)". The tempo and Rhythms were so ecstatic with a pure blend of Afrobeat and pop music genres.


Share King Promise - Slow Down (Remix) ft Maleek Berry Mp3 with others on;

King Promise - Run To You

King Promise - Do Not Disturb