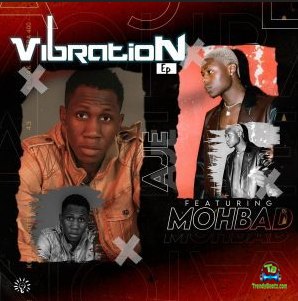 Track Title: E Get Why


The Nigerian singer, Aje has released a new song titled "E Get Why" featuring Mohbad and Small Doctor.


Have you been wanting a new song all this time?... Right here we have a new one "E Get why" by Aje featuring Mohbad and Small Doctor, the Nigerian singers and raves of the moment who contributed to making the song a successful one. They dropped this one a few hours now which has become the new song to deal with. "E Get Why" comes from Aje's new project Extended Play "Vibration" which featured Mohbad in all tracks which have currently been going viral on social media.

The singer and songwriter, Aje can't just let the buzz of his fame fade away. He decided to add pressure to the ongoing show with his new project in which she called in many Mohbad who can dive of the beats.

The song "E Get Why" is another soundtrack where he perfomed well by giving the song a nice vocal and requesting vocal assitance from Mohbad and Small Doctor who added their own voices to create a unique record for the listening delight of the fans out there. The song is another one you've been wanted to give your listening to and here you have it.


Share Aje - E Get Why ft Mohbad, Small Doctor Mp3 with others on;