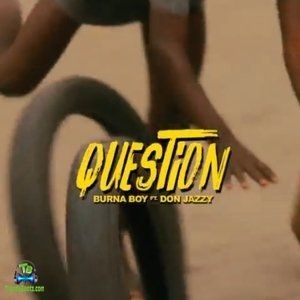 We have a new song on the platform "Question (New Song)" performed by Burna Boy and Marvin Record Boss Don Jazzy.


As we are in the hunt for new songs, we deliver the song "Question" released by the internationally celebrated singer, Burna Boy featuring Dan Jazzy who made the song to be a prosperous one. They dropped this mid-tempo soundtrack not long ago which has started giving pleasure to the listeners out there. The song is another Afrobeat you've been wanted to overhear from and here you have it.

The song "Question (New Song)" was such an anticipated one from both crooners which have landed at our doorsteps. Truly, when it comes to a collaboration like this, Burna Boy and Don Jazzy are capable of doing it better.

The song "Question" is a follow up after he gave us his 2021 still trending song "Kilometre" which he talks about the miles he has walked in this music industry. It was dropped after he won the 2021 Grammy Award as The Best Global Music Album, with the album "Twice As Tall".

This season of the year, he made another entry into the public eye with another amazing song to change the ongoing show, and Don Jazzy the featured act made a wonderful impact by giving in his own vocal. Both singers did perfectly well and it's an amazing one you shouldn't miss right here.