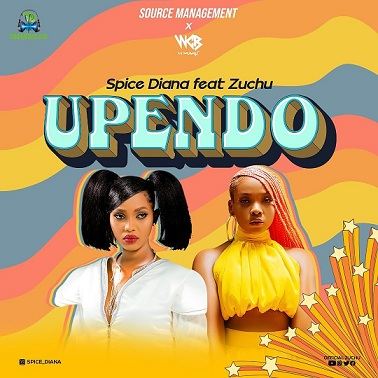 
This time comes to new collaboration on the song "Upendo" performed by the Ugandan female singer, Spice Diana having Zuchu the WCB Wasfi Record signee as the vocal assistance who played a big role in the song. They released this collaborative song in the year, 2021 which has started making a huge trend in Uganda and across the country. The song "Upendo" is a captivating one that will leave a smile on your face.

Namukwaya Hajara Diana known as Spice Diana is a female Ugandan musician who is now being celebrated internationally due to her previous performances and consistent all these years. According to Wikipedia, she goes with the Rhythm and Blues genre which she has been utilising in entertaining her fans worldwide. Spice Diana is a well-talented who has a unique catchy voice and her records so far can tell so much about her potential.

Her new song "Upendo" is a follow up after giving us "Mukwano" featuring Lucky Jo which was released a few months ago. The song was a classic one which its official video has been accumulating lots of views on the Youtube channel. So hew new song "Upendo" is another one where she acutely and having the WCB Wasafi Record female singer Zuchu who added her own sweet voice to create a unique record for the listening delight of the fans. Trust me you won't like to miss this classic record this time.


Share Spice Diana - Upendo ft Zuchu Mp3 with others on;