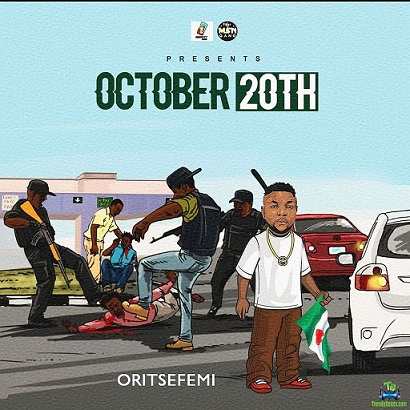 
Amazing Nigerian music maker, Oritse Femi, comes through with a new interesting record called "October 20th", a record he uses to talk about the incident, which happened on October 20th, 2020, at Lekki toll gate. He really took out his time to record and compose this one, one can't afford to miss.
Oritse Femi, came through with this number, after he created magic with Iyanya, on the record called "Baby", which is still buzzing around, garnering lots of streams, views and downloads on digital stores.

This artist is so talented and gifted, always coming out with good melodies. Some of his previous records are "Mercy", "Tomorrow", "Shine", "Greatest" and many more credited to him.
This latest soundtrack "October 20th", is really worth listening to, which will surely uplift spirits across the whole nation. Stream and download the Mp3 audio below.


Share Oritse Femi - October 20th Mp3 with others on;