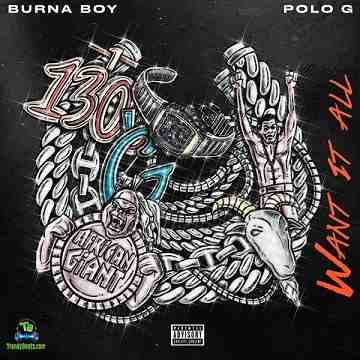 Track Title: Want It All


He is referred to as the Giant of Africa and truly deserves it. Burna Boy comes through with a new song "Want It All" having Polo G, the American rapper as the vocal assistance.
Polo G rose to prominence with the singles "Finer Things" and "Pop Out" in 2018 and here comes his collaboration with Burna Boy. They released this track not long ago and fans are now enjoying it worldwide. The song "Want It All" is an international hit song to deal with and here you have it.

Still celebrating his Grammy Award and after many successful releases over the year, the Afrobeat singer, Burna Boy still proves his talent and has never left the studio all this time. He is being celebrated worldwide due to his consistency over the year and listening to his recent drops, we can see he still got vibes to entertain the fans.

His hardworking has led him to have the Grammy award with his studio album "Twice As Tall" which houses 15 tracks with lots of vocal assistance internationally. The album also comes as one of his projects so far and it's gonna be played endlessly.

Today, after giving us "Kilometre" and Questions" which featured Don Jazzy. The giant singer, updated playlists with a new record "Want It All" which serves as his third single of the year. The song is another one where he tells a little of his past days before fame. It has been a long way for the singer but these days are better days for him.

Are you a good fan of Burna Boy?... I think this new song is for you. Listen up and download the song below!


Share Burna Boy - Want It All ft Polo G Mp3 with others on;