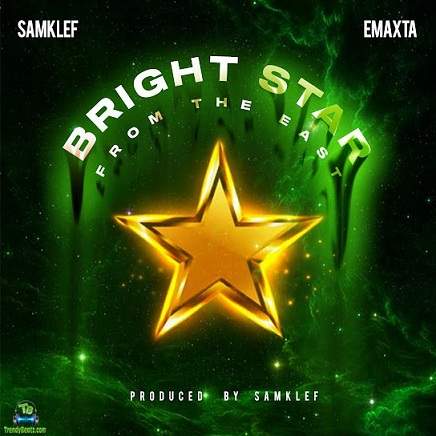 
Brilliant Nigerian record producer and songwriter, Samklef, delivers this mind-blowing record called, Bright Star, in which he enlisted this young musical artist, Emaxta, who took a whole verse for a perfect rendition.
This masterpiece soundtrack comes though after Samklef created wonders with Vector and Musette, on the record named, Dorime. which was a potential hit jam, still collecting lots of streams.

Samklef, is one of the Nigerian respected music producers. This music producer has been in the music scene for over a decade now. He has worked with many Nigerian top-notch lyricists like Wizkid, Banky W, Ice Prince, Jesse Jagz, just to mention a few. Samklef is so talented and gifted.

This month of November 2021, Samklef hit the studio once again with this soundtrack named, Bright Star, with vocal aid from Emaxta. It was accompanied by a colourful befitting music producer, which was shot by Olgee productions, for your viewing pleasure. Bright Star, is capable of lifting on your feet.


Share Samklef - Bright Star ft Emaxta Mp3 with others on;