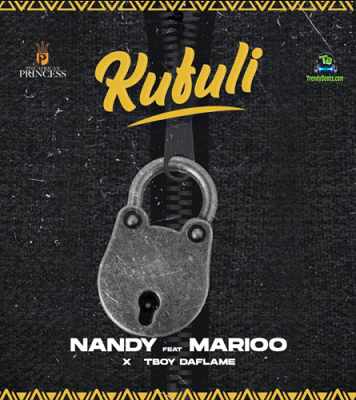 The Tanzanian female singer, Nandy has come through with her new melody titled "Kufuli" featuring Marioo and Tboy Daflame.


With much anticipation, the Tanzanian princess, Nandy dropped the song "Kufuli" having Marioo and Tboy Daflame who played a big role in making the song a successful one. Nandy released this song not long ago which has been making a huge trend and gaining lots of streams and fans positive remarks.

Faustina Charles Mfinanga popularly known by her stage name Nandy is a Tanzanian singer and songwriter of Pare heritage. She is a well-talented one and has been in association with many talented singers in Africa like Joeby, Kofi Olomide and others who have not left the game.

This day, after giving us "Kunjani" about a few weeks ago, the singer rises again with another remarkable record "Kufuli" where she called in Marioo and Tboy Daflame who added their own voices to create an impressive record for the listening delight of the fans.