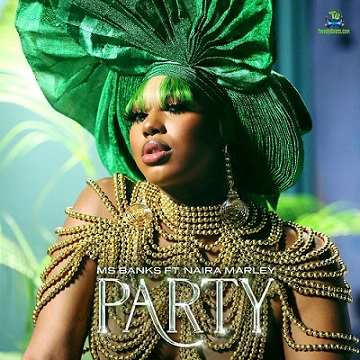 
British rapper and singer, Ms Banks update our playlist this time with a new remarkable track titled "Party" featuring Naira Marley, the Nigerian crazy stage performer and rave of the moment. Banks released this song not long ago which has been going viral on social media and gaining lots of streams and fans positive remarks. The song "Party" is a perfect record that will put a smile on your face and make you hit the replay button again and again.

The new single "Party" is a follow up after she gave us "Go Low" which was released a few months ago. The song was a hit one that had a wonderous performance for its official video which has been gaining lots of views on the Youtube channel.

Still being consistent in the game, Banks requested vocal assitance from the Marlian president, Naira Marley who added his own voice to create a unique record for the listening delight of the fans. The song is on point with the production credit to the Nigerian producer, Rexxie. Truly, the song is another one to update your playlist this time.

Ms Banks - Over (Your Shit)

Simi ft. Ms Banks - There For You