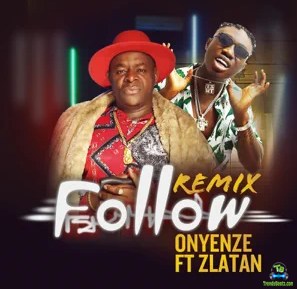 
With the original song, garnering lots of streams, as well as having good standing streaming across digital stores. Onyenze decides to drop the remix of his hit song, Follow (Follow Who Know Road), on this number he taps the availbity of Zanku Records boss, Zlatan, who gave life to the music.

Onyenze released this studio number, after his song, Dis and Dat. This artist is one of the Nigerian highlife musicians, consistent and comes out extraordinary. His records are always on point.

Follow (Follow Who Know Road) Remix, by Onyenze and Zlatan Ibile, is a potential hit jam. Both music maestros did justice to this record. Zlatan Ibile shows off his versatile capabilities on this catalogue. Its production was has handled by Obiroys, doing what he's best known for.

Onyenze is not only a musician but an actor, movie producer and the CEO Crystal Touch Movies. If you really listened to the main song, you won't delay listening to the remix, which features Zlatan Ibilie.