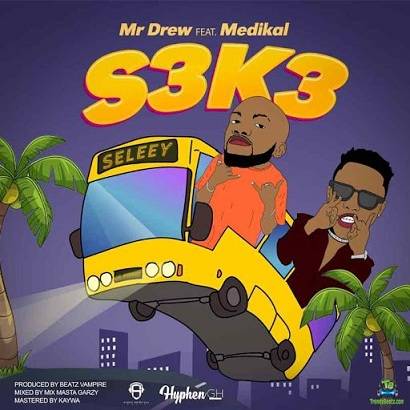 
Gifted Ghanain Afro-pop music singer, Mr Drew is out again with this amazing tune called, S3k3, in which he hires studio appreance from Beyond Kontrol Business Recording artist, Medikal, who gave a top-notch rendition to this record.
Mr Drew whose real name is Andrew Nii Commey Otoo came through with this record after his debut album named, Alpha, an extraordinary body of work, which houses twelfth amazing records. Artistes that appeared on the project includes; Kelvyn Boy, Kwabena Kwabena, KiDi, Victor AD, Seyi Shay and Raybekah.

Still enjoying the album. Mr Drew teams up with Medikal to avail something unique for their fans with this record, S3k3, which was produced by ever blazing Ghanaian music producer, Beatz Vampire, with his magical fingers.
Mr Drew is gradually creating a great legacy for himself. He keeps feeding his fans with good melodies back-to-back without stopping. This one, S3k3 which features Medikal is another tremendous record coming from him.

Share Mr Drew - S3k3 ft Medikal Mp3 with others on;