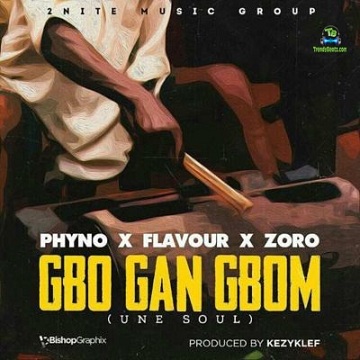 
Ijele Of Africa, Mr Flavour offers his fans base a new favourite gift "Gbo Gan Gbom". The song features, Phyno and Zoro, the Eastern part of Nigerian rappers who played a wonderful and impressive role in making the song done and dusted. Flavour released this song in 2016 which has been giving pleasure to the fans and becoming one of Flavour's best songs ever released.

The song "Gbo Gan Gbom" is an Igbo traditional song produced with their general acceptable instrumentals like Ekwe, Ogene, Alo and others. The production credit goes to the Nigerian well-known producer, kezyklef.

Flavour is a Nigerian singer, born and nurtured in the Igbo land and his songs are mostly made utilising his motherland dialect. He is called the Ijele of Africa and truly deserves the name. The singer has proven himself in many records on the platforms and truly deserves to be on top. His new song "Gbo Gan Gbom" is a perfect record where he showcases his capability and still proves himself as an Igbo citizen. Thanks to Phyno and Zoro who did awesomely in the record.