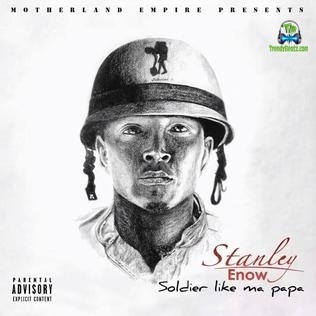 One of the Cameroonian rappers, Stanely Enow offered the Deluxe version of his new song "TumbuBoss" off his new album.

Still keeping his records, the African rap man, Stanley Enow serve the fans the Deluxe version of the song "TumbuBoss" which was the 6th track off his new album "Soldier Like Ma Papa". He released this Deluxe version in the year, 2015 which is also part of the album. The album houses 18 tracks featuring African celebrated crooners like Bill Muicha, Claude Ndam, Locko, 2Baba, Ice Prince, DJ Neptune, Biz Ice, Sarkodie and F.A.B.

Still enjoying other tracks in the album. Stanely Enow decided to offer a Deluxe version of one of the hit tracks in the album "TumbuBoss" which has started making trends in home base and across the country. The song is a perfect one that rises from the Hip-hop genre. "TumbuBoss (Deluxe)" appeared as the 17th track in the album produced by Bebeto.

The song is another one to upset your playlist this time. Listen up and download the song below!


Share Stanley Enow - TumbuBoss (Deluxe) Mp3 with others on;

Stanley Enow - How E Go Be