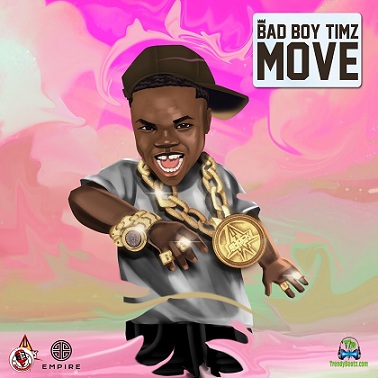 
Amazing Nigeran singer and songwriter, known as Bad Boy Timz hit the studio once again with this stunning tune named, Move (New Song), as one of his 2021 songs, which is a potential hit jam, highly anticipated...
Bad Boy Timz uses this record to open his music account this year 2021 after a long hiatus in the music scene. Bad Boy Timz, is one of the loved singers in Nigeria. In the year 2020, he disclosed a smash hit named, MJ, which amassed 5 million streams, he later linked up with Mayorkun for the remix, which was also a hit.

Still the same year, the YBNL Records boss, Olamide enlisted Bad Boy Timz on his studio body of work, Carpie Diem, on the record called, Loading, which got street credibility and fans fell in love with it. According to Wikipedia, this year 2021, the record has been nominated for Most played Hip Hop song at Net Honours Awards.
Finally, Bad Boy Timz a.k.a Yung Fela bounced back with this danceable record called, Move (New Song). Banjo Semilogo, was responsible for the production of this catagloue.