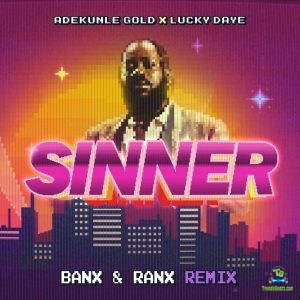 
The Nigerian and international singer, Adekunle Gold has released the remix of his new trending song "Sinner" featuring Lucky Daye, Banx and Ranx.


After a huge success of the international debut song "Sinner", Adekunle Gold offers the remix featuring Lucky Daye, Banx and Ranx. He released this a few hours now which has been going viral on social media which has become an international hit song to enjoy this summer. The song "Sinner (Remix)" is a perfect record that will take your enjoyment ver this time.

Since this year run, Adekunle Gold is one of the Nigerian and African artists with the most hit songs. The first single of Sinner was a hit that started making a huge trend internationally after its release. The song featured Lucky Daye, the American singer and songwriter from New Orleans, Louisiana.

Due to the song trend and likes from the fans, AG Baby made a new offering this season with the song remix where he included Banx and Ranx. The song "Sinner (Remix)" is now going viral and giving pleasure to the fans out there. Truly, the song is amazing and AG Baba just hit us again with this remarkable song. Trust me, you won't like to miss it.