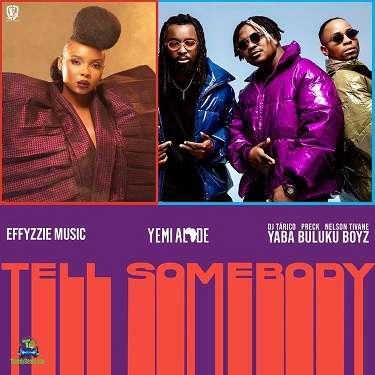 
Still keeping her records, the Nigerian and one of the biggest artists in Africa, Yemi Alade puts out the song "Tell Somebody" featuring Effyzzie Music and Yaba Buluku Boyz who did justice to the song. The song was released in 2021 which has been gaining fans attention and counting lots of streams on the digital streaming platforms.

Yemi Eberechi Alade is a Nigerian Afropop crooner, songwriter, actress and activist known for winning the Peak Talent Show in 2009 after which she signed to Effyzzie Music Group, and had a hit with her single "Johnny" in 2014 which was a massive play after its release. Since then she has gained eminence in the music industry and considered one of the biggest artists in Africa.

Still doing what she knows best, Yemi made a new offering with "Tell Somebody" to end the year, 2021. She called in Effyzzie Music and Yaba Buluku Boyz who rendered good services by adding their own voices to create a unique record for the listening delight of the fans. The song is a perfect blend of the Amapiano, Afrobeat and Afro-house genres that will keep you dancing each time you started listening to it. Trust me, you won't like to miss this offering from Yemi.

Yemi Alade - Get Down