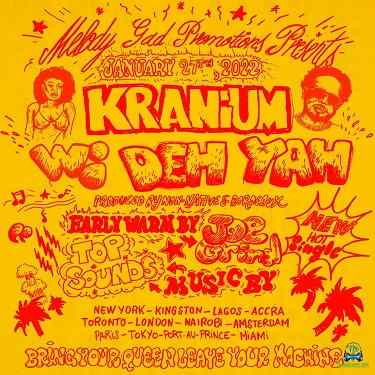 The Jamaican recording artist, Kranium has come through with a new single titled "Wi Deh Yah".


Still keeping his records, the Jamaican Dancehall and Reggae crooner, Kranium released a new favourite gift titled "Wi Deh Yah" to thrill his music fan base and internationally. He made this song worldwide a few hours now which has started making a huge trend in Jamaica and across the county as well.

Kemar Donaldson popularly known as Kranium, is a Jamaican reggae and dancehall singer known for his 2013 hit single "Nobody Has To Know" which gave him international recognition and led him to the Atlantic Records record label. Since then, the singer has been satisfying the fans with his studio records and entertainment in general. His 2017 single "Can't Believe" with the Nigerian singer Wizkid and American singer-rapper, Ty Dolla Sign was a remarkable one that is still making trends internationally.

This time, as the year is just getting started, he kicks off another impressive one that will be accepted by the fans out there. In the song, he performed well and by giving the song a nice vocal and lyrics that will be engaging and enjoyable when listening to it, Trust me, you won't like to miss this Dancehall tune from Kranium.

Share Kranium - Wi Deh Yah Mp3 with others on;