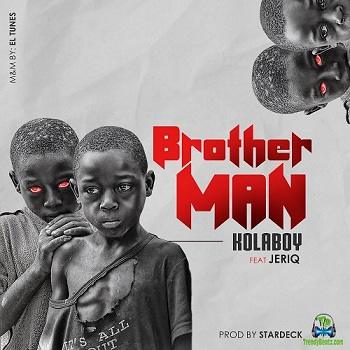 
Still can't let the buzz fade, the Nigerian Eastern rapper and singer, Kolaboy dishes out a new interesting song "Brother Man" featuring Jeriq. He released this song a few hours now which has started gaining public attention and accumulating lots of streams on the digital streaming stores. Fans are widely excited about his new release.

Nwodo Chinonso known as Kolaboy is a Nigerian indigenous Igbo rapper, just like these notable rappers, Phyno and Zoro. He is one of the Nigerian Eastern fast-trending rappers making waves in the industry with his studio records and entertainment in general.

This season, as the year is just beginning and thinking of what to offer, he made an entry into the public eye with such a remarkable and interesting song tagged "Brother Man" as he calls in his brother in the same journey, Jeriq who aid in making it a successful one. Both rappers performed wonderfully well and it's another impressive song that will surely be worth a place in your playlists.


Share Kolaboy - Brother Man ft Jeriq Mp3 with others on;