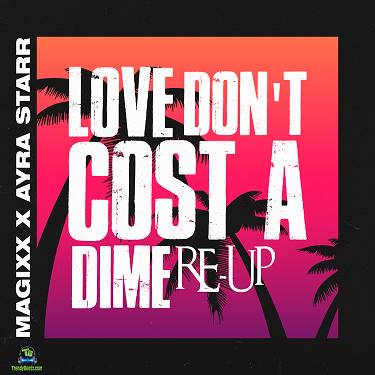 Here is the Re-Up to Magixx new trending song tagged "Love Don't Cost A Dime" for your free download.

One of the Nigerian promising acts signed to Marvin Record, Magixx has come through with a Re-Up to his new song "Love Don't Cost A Dime" which features the in-house female recording artist, Ayra Starr. He released this song in the year, 2022 which has started gaining public attention and accumulating lots of streams on the digital streaming platforms.

Alexander Adelabu, known as Magixx is a Nigerian singer and songwriter who was announced in 2021 as the newly signed act in Marvin Records. Truly, he is a well-talented one who just rises to turn up the industry with his studio records and entertainment in general. Fans are looking up to what he can do as he sets foot for this long journey.

Last year ending, he made an offering with an Extended Play entitled with his stage name "Magixx" where the song "Love Don't Cost A Dime" happens to the first and one of the best tracks. It features no artist but this time comes to a Re-Up alongside the in-house crooner, Ayra Starr who added her voice to create a unique record for the listening delight of the fans.

Truly, the song "Love Don't Cost A Dime (Re-Up)" is a nice one made of the R&B genre where both crooners showcase their different capabilities. Trust me, you won't like to miss such a great offering from Magixx and Ayra Starr.