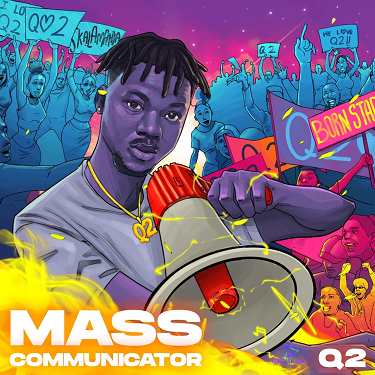 
The Nigerian recording artist, Q2 is back with a new song titled "Bomb" featuring MohBad and C Blvck.


As he continues the journey, the Nigerian emerging singer, Q2 kicks off a new record which he titled "Bomb" as he welcomes MohBad and C Blvck, who added their voices to create a unique record for the listening delight of the fans. He released this song a few hours now which has started gaining public attention and accumulating lots of streams on the digital streaming platforms.

Wanting to turn up the industry with full force, Q2 who is known for his mind-blowing record "Come Online (Remix)" featuring Zlatan and Naira Marley, rises again with a new body of work Extended Play titled "Mass Communicator" where he embeds more energy into it. It was discharged by Bornstaz Entertainment / Dvpper Music.

Mass Communicator, was an anticipated remarkable Extended Play by Q2 but as promised today, it has been shared on all platforms. It comprises seven impressive tracks made of the Afrobeat and Amapiano genres. The project also features Sparkzy Minded, Naira Marley, Zlatan, Demmie Vee, Dj 4kerty, Idowest, MohBad and C Blvck, whose services are highly accepted by the fans out there. Truly, this EP is amazing and here we deal with it.

From the Extended Play, the song "Bomb" appeared as the 7th and one of the best tracks that will keep you dancing each time you started listening to it... Just listen up and download the song below!