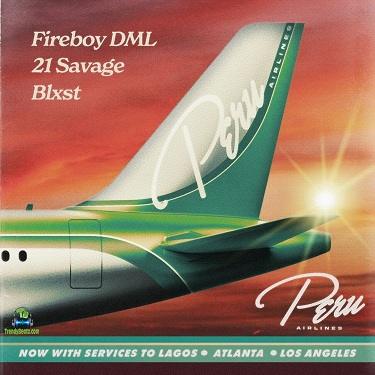 
Today, we have a new US remix to Fireboy top-charting song titled "Peru" featuring 21 Savage and Blxst.


Still can't let the buzz fade, the Nigerian Afrobeat crooner, Fireboy presents a new US remix to his top-charting song "Peru" which had vocal assistance from international rappers, 21 Savage and Blxst who did justice to the song. He released this song a few hours now which has started making a huge trend in Nigeria and across the country as well.

This raving superstar, Adedamola Adefolahan, known professionally as Fireboy DML, is a Nigerian singer currently is signed to YBNL Nation, a record label founded by Nigerian rapper Olamide. Due to this young dude remarkable performances, he is now being celebrated in Nigeria and internationally.

The song "Peru" was released in 2021 which was a massive play after its release and started topping charts. At the end of the year, the remix was made having vocal assistance from English singer-songwriter, Ed Sheeran who added his own flavour to it. The official video of the song is out already accumulating millions of views on the Youtube channel.

Today, Fireboy made it known that it's not yet over for him as he presents another remake of the song, having vocals from International rappers like 21 Savage and Blxst. Both rappers did justice to it and trust me, the song is another one you shouldn't miss this time.

Song produced by Shizzi and Kolton.