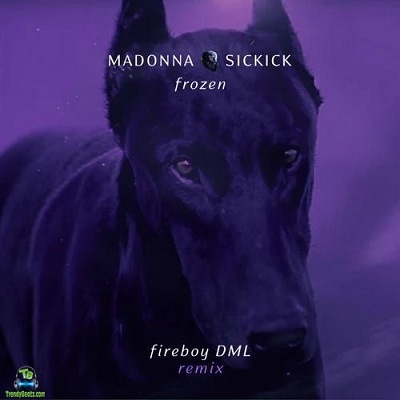 Singer, Madonna dishes out this symphony labelled, Frozen (Remix) to showcase her stance and tenacity in the music scene. She came through with catchy lyrics and hook, while Sickick and Fireboy DML own their own dimension made this remix a remarkable one.

Madonna whose real name is Madonna Louise Ciccone is an American singer-songwriter and actress, noted for her continual reinvention and versatility in music production, songwriting, and visual presentation. Her contribution to the America Music Industry has earned her several achievements.

The original song of this remix called, Frozen was released in the year 1998, taken from Madonna's pertigious body of work christened, Ray Of Light, which encompasses thirteen beautifully composed records, with no guest appearances, displaying her versatility and lyrical dexterity.

William Orbit is the brain behind the production of this song called, Forzen. In addition, the record has been certified platinum in Belgium, Germany, Austria and Norway. Enjoy the remix which features Fireboy DML and Canadian musician, Sickick.