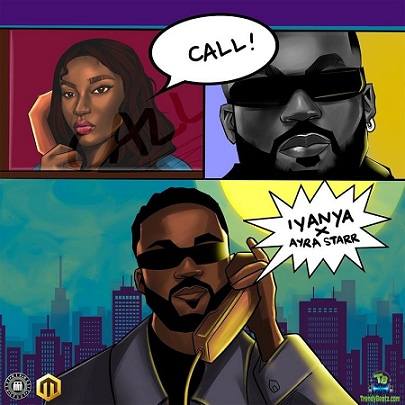 
Update your playlist with this sparkling remedy captioned, Call, written and composed by a prominent Nigerian songster, Iyanya alongside Ayra Starr, who gave life to the music. It was in the year 2022 this remarkable tune was discharged.

Singer, Iyanya who is known for his passion and hard work for good music, uses this tune to open his music account for the year 2022. The featured artist, Ayar Starr, did amazingly well on her verse part. The euphony is so beautiful and soothing to the heart.

Iyanya Onoyom Mbuk, popularly known as Iyanya is a Nigerian Afro-pop singer. This artist has released numerous breathtaking singles and albums which made so much waves. He's best known for his hit single, Kukere, in 2011, with a new dance routine of the same name.

Nevertheless, this latest song called, Call, which features Ayar Starr, got its production reference from Nigerian music producer and singer, known as 1da Banton, mixed and mastered by Millamix. In addition, it follows up after he round up the year 2021 with the record titled, Change Am, starring Wande Coal.,

Share Iyanya - Call ft Ayra Starr Mp3 with others on;

Iyanya - Bow For You

Iyanya - Nobody Has To Know