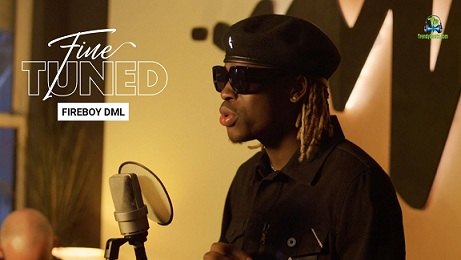 
And here we have the "Fine Tuned Version" of "Peru" by the Nigerian favourite singer, Fireboy DML.


Still adding pressure to it, the Nigerian singer and songwriter, Fireboy DML just releases the "Fine Tuned Version" of his trending song "Peru". He made this version worldwide not long ago which has started making a huge trend in Nigeria and across the country as well.

Adedamola Adefolahan, known professionally as Fireboy DML, is a Nigerian singer. He is currently signed to YBNL Nation, a record label founded by Nigerian rapper Olamide. Fireboy is known for his first debut studio album "Laughter, Tears and Goosebumps" in 2019 which received generally positive reviews from music critics.

Since last year, 2021, the R&B and Afrobeat singer has been making a big wave in the industry with his classic song "Peru" which was released through YBNL Nation and distributed by Empire. It was written by Fireboy and Nigerian records producer, Shizzi who also handled the production. A few months after the mighty trend of the song, "Peru" had a modified version with the English singer-songwriter Ed Sheeran, which was a massive trend as well after sites release. The official remix which was released in 2022, had vocal appearances from American rappers 21 Savage, and Blxst.

Thinking it's not yet over, Fireboy just did a Fine Tuned Version of the song where he still embeds more energy into it which will be more generally accepted by the fans out there. It was played with the Organ instrument and seeing his impressive performance this time, he truly deserves lots of kudos. Truly, the song is worth more listening to and here we enjoy it.