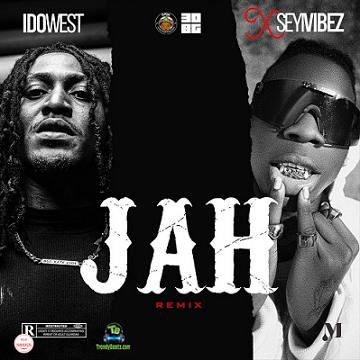 
One of the most recognized Nigerian musicians, Idowest comes to the conclusion of releasing the remix of his sog "Jah" as he features the Nigerian rave of the moment, Seyi Vibez. He released this song in the year, 2022 which has started gaining fans' attention and counting lots of streams and positive remarks.

Adekunle Idowu who is professionally known as Idowest is a Nigerian singer-rapper. He is currently signed to Davido Music Worldwide (DMW), which is owned by the Nigerian-American singer, Davido.

Thinking of what to offer at a time like this, Idowest calls out Seyi Vibez as they team up in releasing the remix of his beautiful song "Jah" which was the first track from his new 2021 album "Mafia Culture Vol 2.0". The album comprises 10 songs featuring guest artists like Davido, Mayorkun, Bella Shmurda, Zlatan, Mohbad, Q2, Abramsoul and C Blvck with the production assistance from Holagold, Hysaint, Vstix, and Smeezbeatz.

So right here on TrendyBeatz, is the remix of "Jah" by Idowest and Seyi Vibez... Listen and download it below!!!