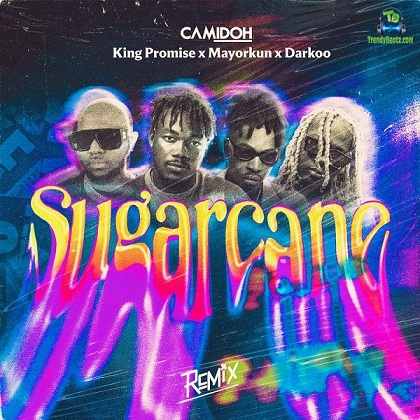 
Here comes the remix of the oustanding song named, Sugarcane which features Ghanaian music crooner, King Promise alongside Mayorkun and Darkoo. The song is officially owned by Camidoh, one of the emerging singers in Ghana, which was released in the year 2022.

This masterpiece soundtrack is a really worth listening to. Camidoh teaming up with King Promise, Mayorkun and Darkoo is a nice collabortaion. All did extemerly well on the song for their fans to obtain pleasure from it. You have it below.

Camidoh is one of the Ghanaian growing singers, his fans keeps increasing as the days goes by. The record, Sugarcane gained the singer much fanbase in the music scene. This remix is another hit track that will take over the music mainstream in no distant time.

In addition, if you’re very bored and looking for good music to liberate you from ennui and get you relaxed, this might be just what you need. Produced by Nigerian ace music producer, Phantom.