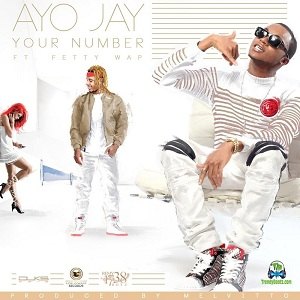 
And here we have the remix of "Your Number" by the Nigerian-English singer, Ayo Jay featuring Fetty Wap.


Two years after the release of "Your Number", the Nigerian-English singer, Ayo Jay dropped the remix as he calls out the American rapper, Fetty Wap who added his voice to create a unique record. It was also released by One Nation.

"Your Number" (2013), was a massive trend in Nigeria and internationally. A nice record of Afropop and Dancehall produced by the British record producer Melvitto. In the song, Ayo Jay goes beyond the expectation as he gives the beat a nice voice and catchy lyrics. The top-charting record gained millions of views on Youtube and downloads for digital platforms.

Today, he calls out the American rapper, Fetty Wap, as they create something good about the remix which would be generally accepted by the fans out there. Both musicians performed awesomely well and the song is really another one that will surely be worth a nice place in your playlist and here you have it for your free download.


Share Ayo Jay - Your Number (Remix) ft Fetty Wap Mp3 with others on;