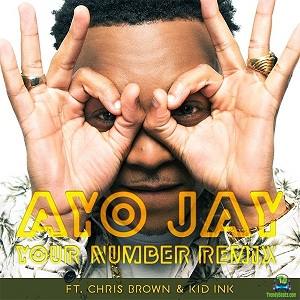 
Again, we have the remix of "Your Number" by the Nigerian-English singer, Ayo Jay featuring Chris Brown and Kid Ink.

The American record label, RCA Records re-released the music video to "Your Number" after which the remix of Chris Brown and Kid Ink follows. The video has already gained 30,111,153 million views on YouTube and still accumulating more.

Your Number was a 2013 single by Ayo Jay which was produced by British record producer Melvitto via One Nation. It was a massive trend after its release which has gained millions of views on Youtube and downloads for digital platforms. It is a nice record made of Afropop and Dancehall, where Ayo Jay goes beyond expectation.
Today, the second remix features Chris Brown and Kid Ink, who added their voices to create something good. Truly, the song is worth more listening to and here we enjoy it.