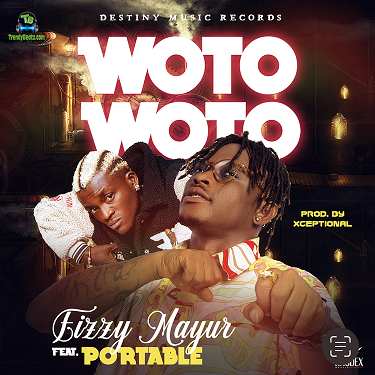 
The Nigerian singer, Fizzy Mayur is out with a new single titled "Woto Woto" featuring Portable.


This time, Fizzy Mayur calls out the Nigerian rave of the moment, Portable as they team up in creating this beautiful song "Woto Woto" which would be acceptable by the fans out there. He released this song in the year, 2022 which has started giving pleasure to the fans out there.

Hammed Mayowa Fisayo known as Fizzy Mayur is a Nigerian indigenous singer who rises with full energy to dominate the industry with his studio records and entertainment in general. He is a well-talented one whom his songs can tell so much about.

Thinking of what to offer this time, he dropped this masterpiece soundtrack "Woto Woto" as he call out the industry's trouble maker, Portable, who added his voice to create a unique record for the listening delight of the fans. Trust me, you won't like to miss such an offering from Fizzy Mayur.