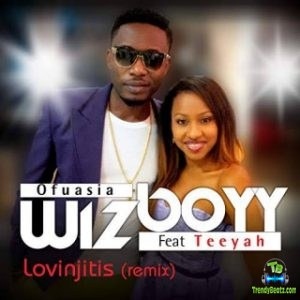 
Famous Nigerian music maestro professionally known as Wizboyy unfolds this dazzling and refreshing song named, Lovinjitis (Remix), with vocal assistance from Teeyah, whose flavour was overwhelming in her verse part.

This masterpiece soundtrack was released in the year 2014. Both Nigerian born music entertainers were able to showcase their individual talents on this melody which was well-accepted by their music listeners.

Wizboyy whose real name is Isioma Ofuasia is a Nigerian afro pop/high life artiste and producer, he rose to stardom with the record dubbed, "Screensaver", which features J. Martins. He has worked with so many A'list artists in Nigeria like Flavour, Ice Prince and others.

Lovinjitis (Remix), by Wizboyy and Teeyah, is still making a serious impact, ever since its release and will continue to linger on the playlist of their fans and the music commuity.