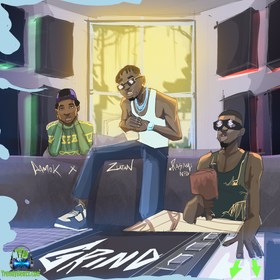 
One of the rising singers from Nigeria who goes by the name, Damo K delivers this harmony titled, Grind (Remix), in which he taps the availability of Zlatan, in addition to the already featured artist in the person of Rasaqi NFG, to deliver an outstanding remix, for the audience out there.

The original song became an instant hit when it was released, still making a major impact till this moment. However, having Zlatan, one of the Nigerian hitmakers on this remix is an excellent one, he spiced and ginger the record, for his fans to emanate pleasure from it.

Damo K is one of the fast-rising singers in Nigeria presently to watch out for. He is favoured with several records like, "Odo", "Your Way" and many more. Enjoy and experience the world of Damo K, Zlatan and Rasaqi NFG with, "Grind (Remix)".